"You don't make progress by standing on the sidelines, whimpering and complaining. You make progress
by implementing ideas." 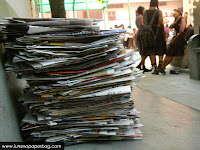 Everyone is aware of the harm caused by plastic bags. A simple initiative to reduce the usage and effect of plastic bags by replacing them with newspaper bags started as "IU Newspaper Bag Project", a simple step towards saving the planet. This idea has been implemented in various places by engaging people to make newspaper bags using old Newspapers. Once again, it was put into action by a bunch of 6 people who conducted this project from 16 volunteers.

Six people, Mohan B.N, Surendra Ayer, Aditi Dhanakshirur, Nikhil Kanchan, Pavada Bassaiyya and Spoorthi M.C took the initiative to spread the message and create an impact. They took a target to make 1000 newspaper bags but the result exceeded the target. They have been the cause to impact 3452 people in three countries India, Nepal and Latvia. In India, three districts from Karnataka, Mangalore, Bangalore and Kundapura actively involved in bringing about the change. A total of 18 Institutions showed their support by involving their students and teachers in making beautiful newspaper bags.

In a relatively short span of time these young enthusiastic people could make 3031 Newspaper bags!!!
That is 3031 plastic bags shunned! A victory over the complaints and cribbing that nothing can be done. This campaign inspired many to ACT. The message spread across to many people and duplicated. The awareness was spread through social networking sites as well. They reached hundreds of people online and offline creating a huge impact and changing the mindset of people to become sensitive to the issue of harmful effects of plastics.

With the support of 50 volunteers this campaign was conducted in various places. They have contributed to sensitize people towards the cause. They have spread the message to people of all walks of life. Children, students, housewives, working professionals, teachers and old people equally participated to BE THE part of this massive CHANGE. The volunteers did a great job in reaching out to people and spreading the message through ACTION. Their work should be appreciated and applauded. Together with volunteers, the team has done an awesome job in resonating the message and enlightening people. 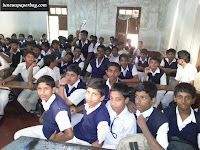 Nature has selfless model of encasing the entire class of living beings in a beautiful and magical environment. It’s time we stop disrupting the framework and respect the essence and beauty of the gift. If a bunch of six people could dedicate their time to make a difference, everyone can do it. Let us all act before it's too late. Let’s realize before it becomes too critical. Let us begin before it ends forever. Now is the time to take an extra step to reverse the harm done and restore the beauty back and say "Live and Let Live" because, "The world has enough for everyone's need, but not enough for everyone's greed."

Inspiration Unlimited
IU: A vision founded to inspire people to become champions & bring the hidden leader inside them into the limelight.